HOW TO PLAY THE GAME

Dinn is a fast-paced action card game where you harness legends and myths from all of human history and literature. You must use strategy, and luck to defeat your opponent.

Each player begins the game with three Heart cards. Play takes place over a series of rounds. During each round, both players reveal one Hero and up to two Equipment or Action cards. In addition to various game-changing effects, these cards contribute to the Heroes’ Power. After all cards are resolved, the player with the weaker Hero must shatter a number of their Heart cards.

When your opponent’s last Heart card is shattered, you are victorious!

We highly recommend that you watch the below video, and read through the entirety of this rules page before you start playing.

This quick play section will introduce you to the core concepts of the game, but if this is the first time you’re playing Dinn, we recommend that you read through the entire rule page prior to starting your first game.

Shatter all of your opponent’s hearts.

A game of Dinn is played through a series of rounds. Some games can last a single round, and some games last many rounds. Additionally, each round is broken up into phases. These phases are outlined below. 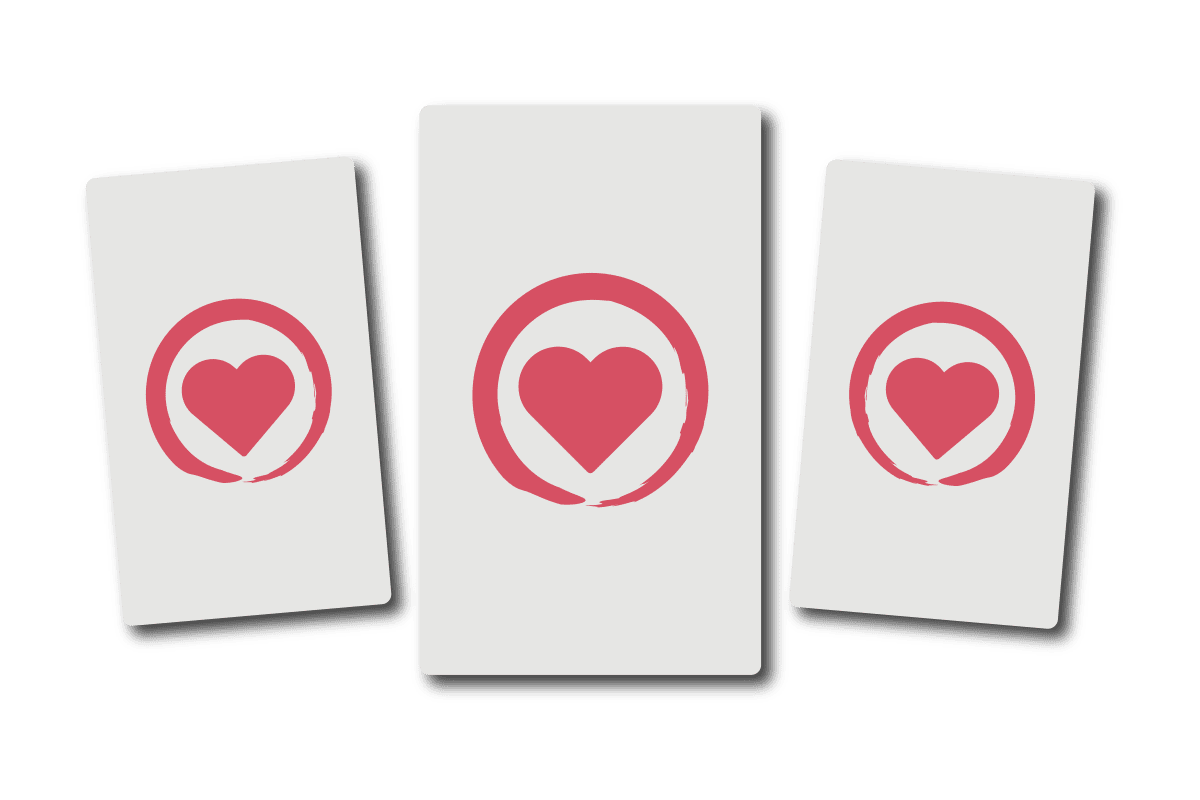 This value indicates how strong the Hero is. It may be modified by subsequent Equipment and Action cards, and that total will determine the winner of the round.

Each Hero has from one to three Hearts. This indicates how many of the player’s Heart cards will be shattered if this Hero is defeated.

Each card has a specific ability. Some take place immediately when they are revealed. Others influence the Power calculation at the end of the round.

The text and codes here are instrumental in solving the card’s puzzle in order to unlock more cards and advance Dinn’s story.

Aside from the pleasing aesthetics, each card’s art may also contain clues to unlocking it’s unique puzzle. 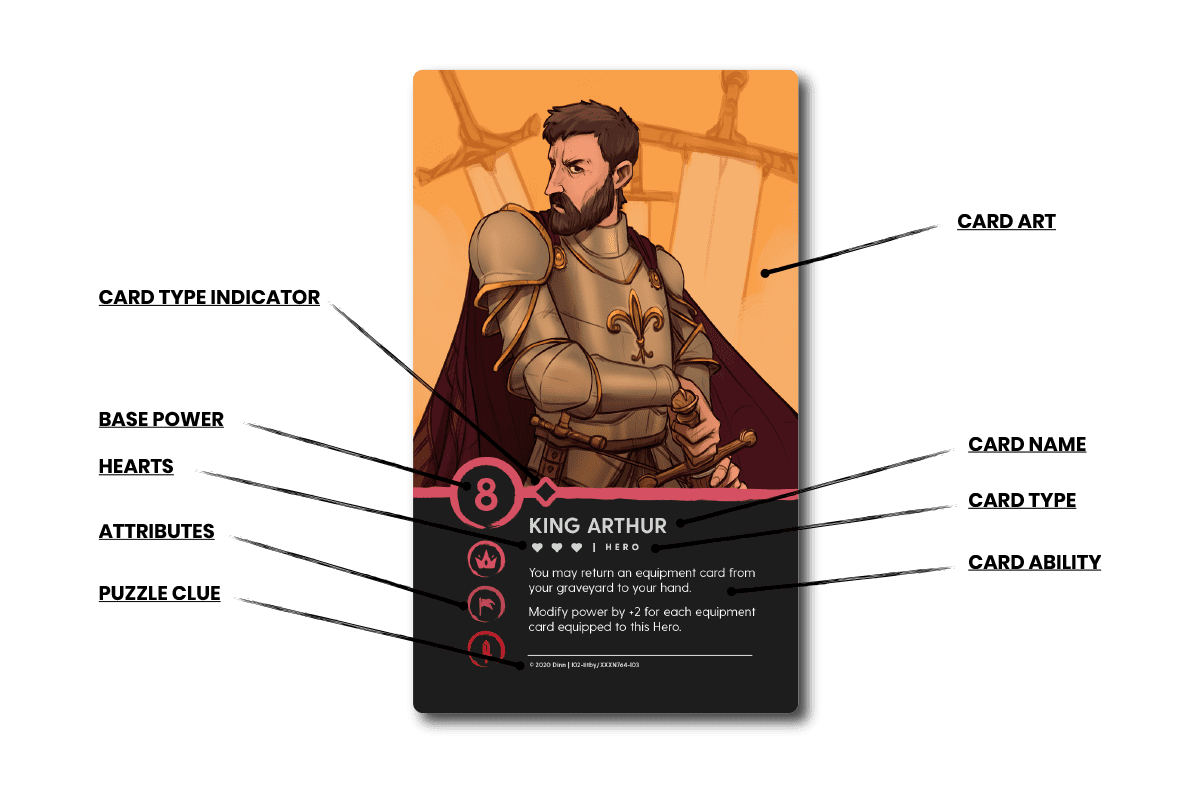 This value is added to your Hero’s Base Power to determine the stronger Hero at the end of the round.

An Equipment card’s Attributes must all be present on the active Hero in order for the card to be played; therefore, cards with more Attributes are harder to play.

Unless otherwise stated or implied on the card itself, all abilities activate immediately upon reveal. 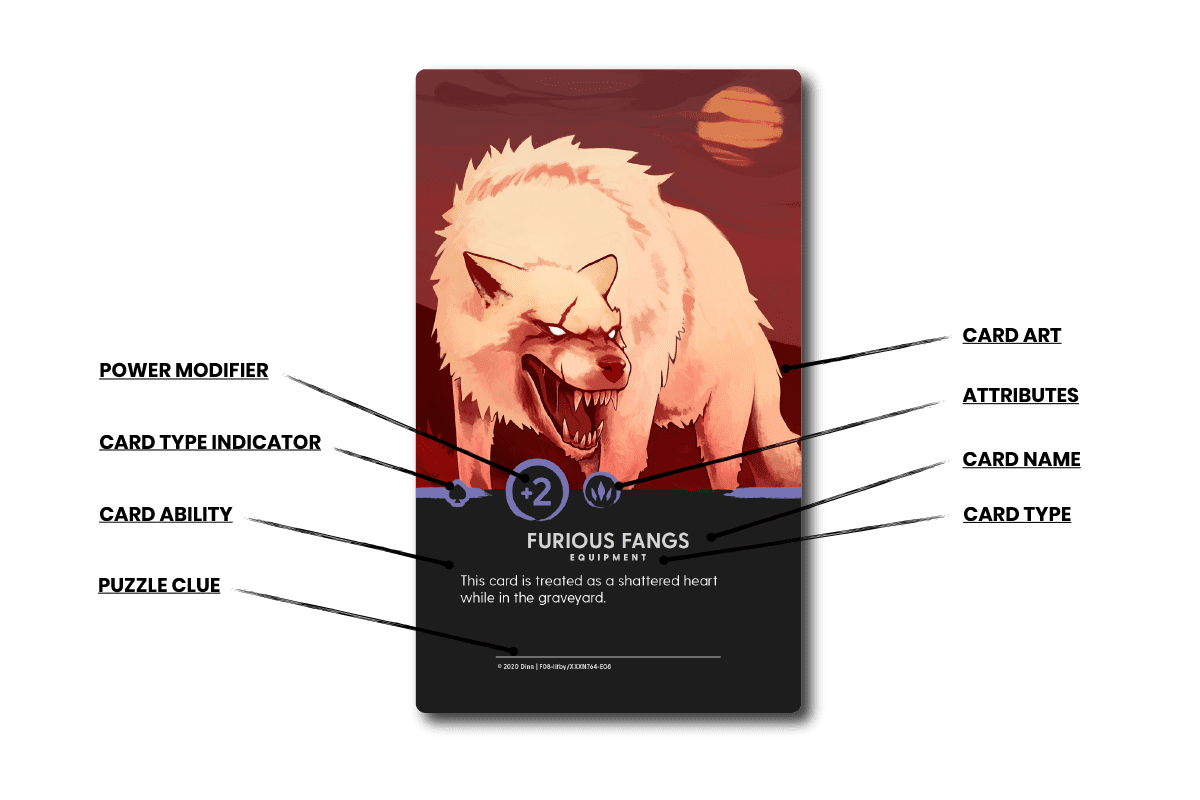 An Equipment card’s Attributes must all be present on the active Hero in order for the card to be played; therefore, cards with more Attributes are harder to play.

Unless otherwise stated or implied on the card itself, all abilities activate immediately upon reveal. 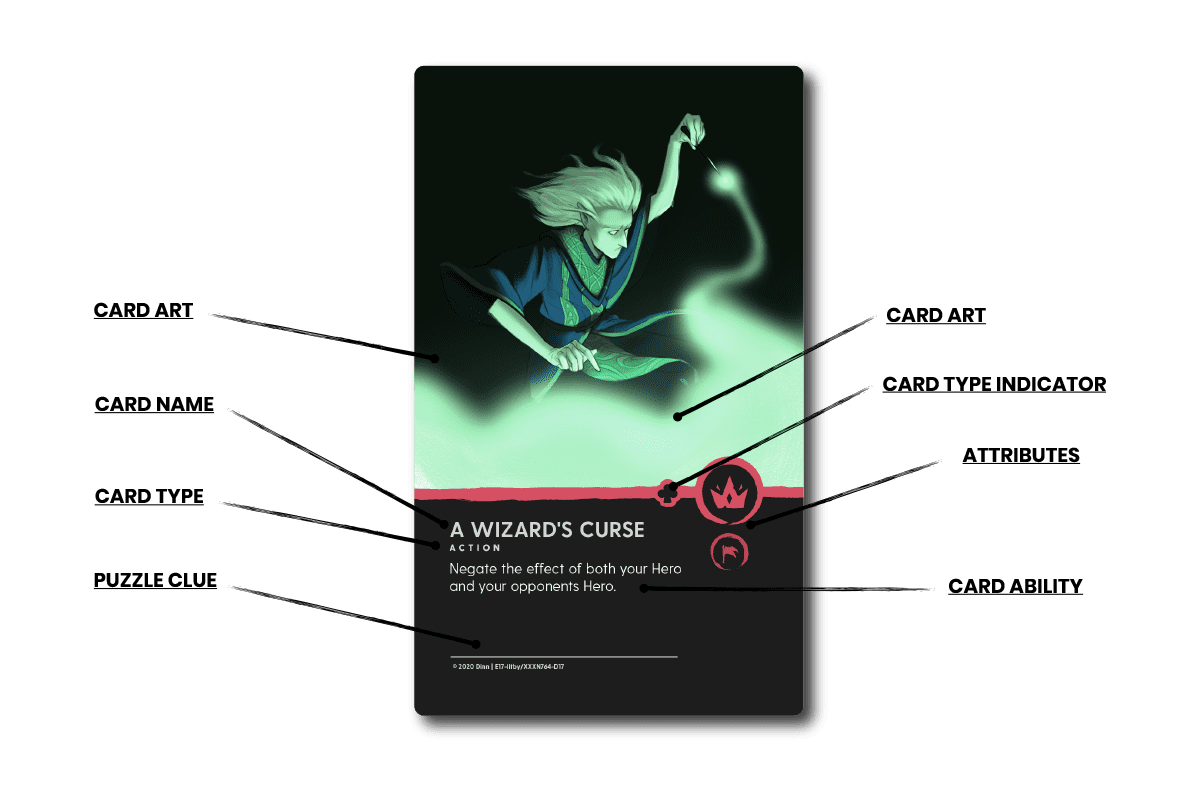 Deck construction is a large component of Dinn. You may customize your deck as much as you’d like with the following constraints. 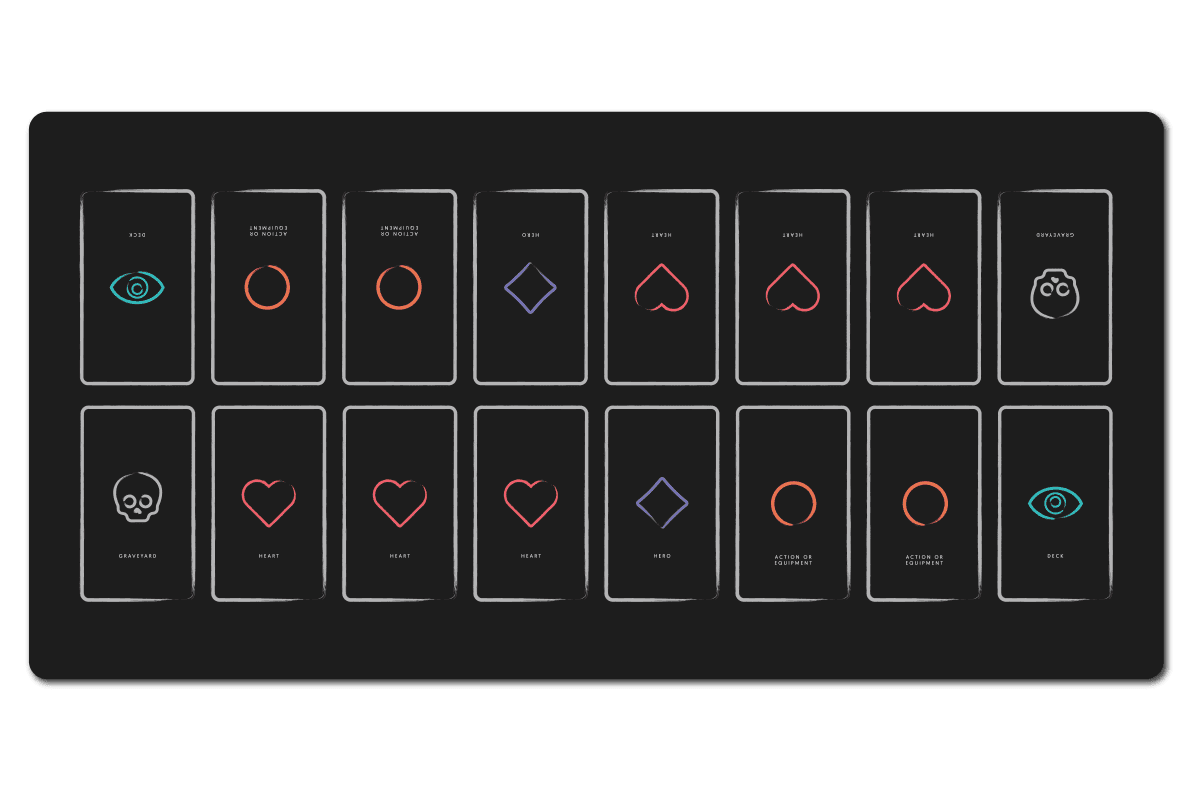 Each round, other than the first, begins with each player drawing two random cards from the top of their deck.

There is no limit to the number of cards you may have in your hand.

If a player runs out of cards in their deck, that player shatters a heart at the beginning of each round where they fail to draw at least one card.

Each player should read the name, power, and ability of their Hero once it is revealed. Starting with the Hero with the higher power.

Once you know what Hero your opponent has played, you now know if you should play offensively, or defensively.

Each player should read the name, and ability of their Action or Equipment card once it is revealed.

In order for a card to be legally played, all the Attributes on the Equipment or Action card must also be present on the player’s active Hero.

If the Hero card does not have all the necessary Attributes, the Equipment or Action card cannot be played. If an illegal card is mistakenly played, remove it from the game, and the player does not get to play a replacement.  Please note: A card removed from the game is not sent to the graveyard. Simply place it somewhere away from the playing surface.

If you have no card you wish to play, declare “Pass”. Your opponent then has the option of changing the card they played, or also declaring a “Pass”. If your opponent does play a card, their card is revealed and its effects are resolved normally. 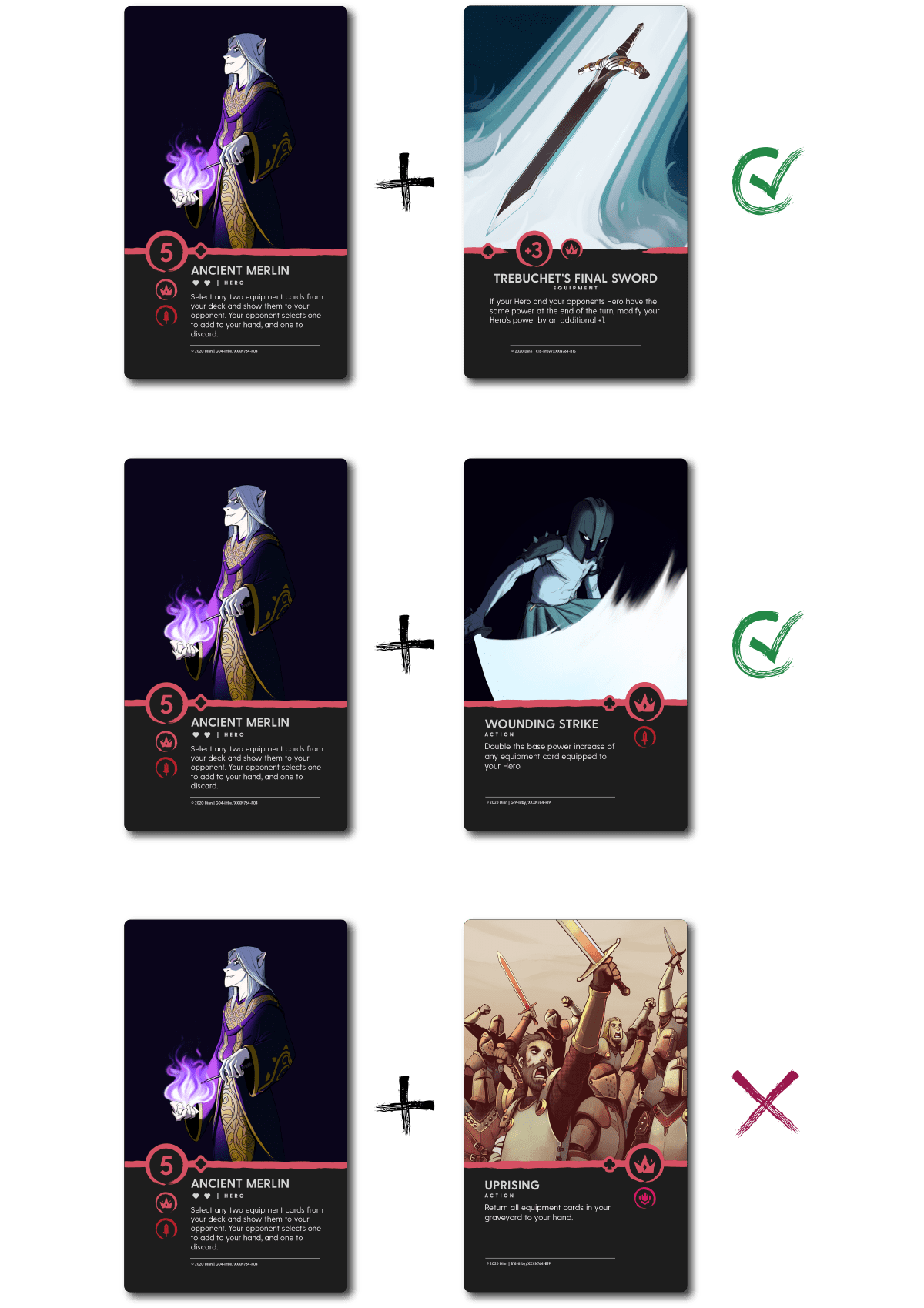 The third reveal is played exactly like second reveal.

Each player should read the name, and ability of their Action or Equipment card once it is revealed.

If you have no card you wish to play, declare “Pass”. Your opponent then has the option of changing the card they played, or also declaring a “Pass”. If your opponent does play a card, their card is revealed and its effects are resolved normally.

Determine the Winner of the Round/Game

After the third reveal, and all card abilities have been resolved, total the value of each Hero’s Power. Begin with the Base Power and modify it by all applicable Equipment and Action cards in play.

The Hero with a lower Total Power loses the round. That player must then shatter a number of Heart cards equal to the number of Hearts on the Hero they played.

In the case of a tie for Total Power, no Heart cards are shattered. Simply continue to play with the Clean Up phase.

If at any point a player no longer has any heart cards in play, they have lost the game. Separate the Heart cards from the graveyard, and you’re ready to play again.

Move all played Hero, Equipment, and Action cards to their owner’s graveyard.

If both players still have Heart cards in play, begin the next round by drawing two random cards from the top of their respective decks.

Please note: Any card abilities that alter a card are only active during that round unless otherwise specified. Once a card is in the graveyard, it is effectively reset.

For example, if you play a card that adopts another card’s Attributes when that card is sent to the graveyard, it does not keep the adopted Attributes. The card reverts to whatever Attributes it originally had prior to activating its ability (unless otherwise specified).

In Dinn, to negate an ability means to treat a card as if it has no Card Ability text. Negating an ability does not affect base power on Hero cards, or base power increases on Equipment cards.

In Dinn, when a heart card is discarded from the field to the graveyard, it is “shattered”. If a card references shattering a heart, or a heart being shattered, it is in referring to the process of moving a heart from in play to the graveyard/discard pile.

If a card ability requires that you search your deck for any reason, you must shuffle your deck afterward.

If a card’s ability relies on the information your opponent cannot reasonably possess, you must share this information.

For example, if a Hero increases their Power based on the number of Equipment cards in your hand, you must reveal your entire hand to your opponent.

what happens if I don’t have a hero in my hand?

At the beginning of a round, if a player does not have any Hero cards in their hand OR their deck, they lose the game.

What is a “graveyard”

The cleanup phase has you send all the cards that were played during the round to the graveyard.

If a card ability would add a card that you do not own to your hand, deck or graveyard, that card is instead sent to the original owner’s graveyard.